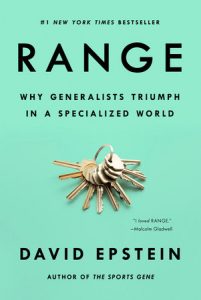 Plenty of experts argue that anyone who wants to develop a skill, play an instrument, or lead their field should start early, focus intensely, and rack up as many hours of deliberate practice as possible. If you dabble or delay, you’ll never catch up to the people who got a head start. But a closer look at research on the world’s top performers, from professional athletes to Nobel laureates, shows that early specialization is the exception, not the rule.
David Epstein examined the world’s most successful athletes, artists, musicians, inventors, forecasters and scientists. He discovered that in most fields—especially those that are complex and unpredictable—generalists, not specialists, are primed to excel. Generalists often find their path late, and they juggle many interests rather than focusing on one. They’re also more creative, more agile, and able to make connections their more specialized peers can’t see.
Provocative, rigorous, and engrossing, Range makes a compelling case for actively cultivating inefficiency. Failing a test is the best way to learn. Frequent quitters end up with the most fulfilling careers. The most impactful inventors cross domains rather than deepening their knowledge in a single area. As experts silo themselves further while computers master more of the skills once reserved for highly focused humans, people who think broadly and embrace diverse experiences and perspectives will increasingly thrive.

I also hear from a lot of people focus on one thing, do one thing well before moving on to the the next business or project.  That doesn’t work well for me.  When you are thinking about a million different things at the same time.  I feel the best time to execute is now.  So for me personally I work on one business or project until I come to a natural stopping point.  This might be at 10 in the morning, so does that mean I should just pack up my bag head home and have a serious NCIS marathon binge?  Of course not, I start working on another business or project until I get to a stopping point or have to stop for the day.  And that pattern continues. While most of what I do is electronic based, there are some differences in each business that help me compliment other businesses I have.  So by me having “range” I’m able to learn and do more by not have that tiger mom focus that everyone thinks you need to have.
In the beginning of the book Epstein talks about how those who have become number one in their fields did not necessarily have tiger mom focus. Some did but other didn’t, there was no data pointing one way or another.  Those who had diversity in their upbringing had just of good of a change to be number one in their field as those who had a tiger mom work ethic.
One of my favorite parts of the book was when they discussed the NASA thought process on how had they had “range” in there collection of data, and how they made decisions lives could have been saved.  (I will leave it at that, so I don’t ruin anything in the book).  No spoilers here!
The book is quick read (or listen) I finished it in ten days, but could have been sooner.  I think this is a great book for those who want to review other ways of doing things than those who feel you need to only focus on one thing if you want to be great.